Nell Jones’ family have unveiled plans for a new ‘Garden of Memories’ outside Holmes Chapel School with an area where people can reflect and think, open to the whole community. 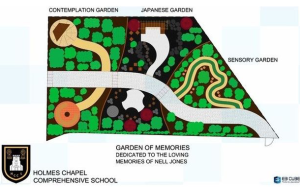 In a heartbreaking interview, they have told how the little things in life are what they miss

Nell Jones was one of 22 people to go to a concert in Manchester on May 22 and never return home. The 14-year-old was taken from her family in the most tragic of circumstances. But her loved ones are determined to do something positive to honour her memory. Her family has found the grief unbearable. For them, time is no healer. Things only get worse.

In a heartbreaking interview, they have told how the little things in life are what they miss; the constant reminders are what hurt.

Nell’s older brothers, Sam and Joe, and father Earnie spoke to the M.E.N. as they unveiled plans for a Garden of Memories at her former school. “Nell’s passing has been massive loss to us all, and the more time goes on the more we remember all the little things she did that we miss,” said Sam, 30. “It’s the silly things, like when you’d tell a joke that you know she wouldn’t laugh at – and you’d tell it just because you know she wouldn’t laugh and it would wind her up. When you go places Nell hadn’t been to, and you know she would’ve liked them, it’s just a constant reminder that she’s not here to share them.”

Sam added: “School’s starting back soon, she should’ve been going back into the next year and she’d be doing her options and then coming home and telling us all about them. It brings this tremendous sadness, you go to her grave and you think ‘how has this happened? How have we ended up in this situation?’

“The realisation of what you have lost becomes more real, but you still don’t believe it – you still can’t believe it. With time it doesn’t get easier, it gets harder. For the first six weeks afterwards there was always something going on, but now it’s quietened down. It gives you more time to think about what’s happened and to come to terms with it.”

Sam said his family has taken comfort in the kindness and support of others since Nell’s death. “But being unable to see her grow into a ‘superstar’ is painful. We miss what Nell was growing into,” Sam added. “Every time you saw her, she was growing up and she was maturing into this young woman who you couldn’t help but feel was going to do something fantastic. The greatest sense of loss isn’t what we had, time has already took that away from us, it’s what we’re not going to have. Sitting there thinking, ‘what would she have thought of this? Or what would she have thought of that?’ That’s what’s hard. She would have been a fantastic individual, she would’ve been a superstar.”

Work is now underway on the Garden of Memories at Holmes Chapel Comprehensive School and Sixth Form College. Nell’s friends have been heavily involved in its design. The garden will be split into three different sections, and will sit outside the school’s security perimeter so it can used by anyone wanting a quiet moment of reflection. It will feature a ‘contemplation garden’, where people can sit and talk.

There will also be a Japanese garden which will have a pebble stream where people can leave a stone, decorated with a pattern, or a message or picture. The final section will be a sensory garden, which will focus on sound, smell and texture, and be aimed at pupils with special educational needs.

Joe, 28, said: “We want to use this tragedy and Nell’s name to help other people and hopefully this will be the start of it. We wanted to do something that Nell would be proud of. She would always be there to help people, and we wanted to continue that.”

Denis Oliver, executive headteacher at the school, said staff and students have been overwhelmed by support for the project. He said: “The Remembering Nell Fund has been set up to create a lasting memory to Nell. One that she would have been proud of. The cornerstone of what is planned, will be a new ‘Garden of Memories’, an area where people can reflect and think. It will be an area open to our whole community. We have been overwhelmed by the level of support from within our school, from Nell’s family, friends and the local community.”

Anyone wanting to donate to the fund can send a cheque payable to ‘The Remembering Nell Fund’ to Holmes Chapel school – Selkirk Drive, Holmes Chapel, CW4 7DX.