The ancient yew by St. Luke’s entrance is included in a new book “The Immortal Yew” by Tony Hall – the manager of the arboretum at The Royal Botanical Gardens:

In the Churchyard at Goostrey within feet of the entrance to the Church is a very old and most interesting Yew tree of enormous girth, which until recently does not seem to have attracted much attention. But it is almost the same girth as the famous yew in Selbourne Churchyard referred to by Gilbert White in his “Natural History of Selbourne”, which still draws crowds despite having been severely damaged in the great gale of January 1990. The age of the Selbourne yew has been estimated by Mr Alan Meredith, a leading expert on dating trees, to be about 1400 years, but this cannot really be used as any guide in the case of the Goostrey yew because of the differences in soil and climatic conditions.

The probability is that the first Goostrey Church would have been built on the rising ground on which the yew was growing, and we do not know exactly, when that was. The Short History of Goostrey, a copy of which can be seen on the table at the back of the Church, records that “Goostrey Chapel was built before 1220” and as far as we know that was the first place of worship on the site. We are of course in 1992 celebrating the bicentenary of the present church, and its predecessor was a typical black and white half-timbered Cheshire Church. It is not certain when the black and white Church was built, but it is known that there was already a Church of some sort in Goostrey in 1220 because it appears in the earliest known list of diocesan Churches made in connection with a tax levied by Pope Nicholas in that year.

There was also a small Chapel in what is now Goostrey built by Thomas, Abbot of St Werburghs, under a licence from the Abbot of Dieulacres, then the owners of the advowson of Sandbach. This licence authorised Thomas to have a Chapel in his Manor-house of Barnshaw. It is known that monks from St Werburghs were sent to Goostrey for rest and recuperation and that they stayed at Barnshaw Hall and sometimes at the Old School House, and the Chapel would have been built for their use. Abbot Thomas is generally supposed to have been Thomas De Capenhurst who was Abbot from 1245 to 1269, so that the Chapel would have been built after 1245 when there was already an ecclesiastical building beside the yew. In fact the licence from the Abbot of Dieulacres makes express mention of the “Chapels” belonging to the Mother Church of Sandbach, which could only refer to the existing ecclesiastical buildings, one at Holmes Chapel and one at Goostrey. Abbott Thomas’s Chapel was almost certainly the Chapel at Barnshaw Hall, which survived until quite recently and was only demolished between the wars.

There would have been nothing unusual, in fact rather the reverse, in the church, when it was built, being put beside a yew tree because of the reverence then felt for yews. They were objects of veneration in pre-Christian times and used for both worship and meeting places. An old yew which has not been cut or shaped puts out branches for a great distance and these grow down to the ground where they root and form anchors or perhaps bottresses, for their parent tree, and then spread again. In some cases the covered area has been big enough to give shelter for a gathering of four or five hundred people. These special trees were places of meeting and worship in pre-Christian days and were often in dominating sites and sites of local significance like ancient burial mounds.

Mr. Alan Meredith himself visited Goostrey in January 1992 and examined not only the yew, but a very interesting painting of the Church made in 1853 which gives an indication of the probable development of the yew at that time. It was a lovely unspoiled tree then, but sadly it has been subsequently cut back in an unnecessarily drastic way, no doubt in the interests of the church’s safety in southwesterly gales. But as a result the bole is only about 5 feet tall before branching out compared with twice that or more in the case of the Selbourne yew. Measurements taken by two interested members of the Parish independently both arrived at a girth of 26 feet, which is a few inches larger than the Selbourne yew as measured by Mr. Meredith himself in 1981, but the Goostrey one, possibly because of the way it was cut back, has become “fluted” by epicormic growth, and to allow for this it seemed reasonable to reduce the diameter implied by a girth of 26 feet by about 4 inches or half the depth of the “fluting” at each end, and this in turn implies a true circumference of about 24 feet. Having regard to this factor and to information supplied to him before his visit and to the evidence as to the size of the tree 140 years ago deducible from the painting, Mr. Meredith assessed the age of the tree at 1200 years. On this footing it would have been planted towards the end of the 8th century AD during the reign of King Offa II of Mercia, in whose kingdom the Parish of Goostrey would then have lain. The other very interesting comment that Mr. Meredith made came from his examination of the painting. It was done before either the road that runs past the Red Lion or the road which runs down Church Bank were constructed. A good deal of the mound on which the Church stood must have been cut away to make these roads, and, as shown in the painting, it extended much further towards both the school house and the Red Lion and formed a symmetrical curve. with the Church at the highest point. Mr. Meredith noticed this immediately and said that the shape as shown in the painting was that of a typical ancient burial mound, which it almost certainly was.

The Goostrey yew then was an old, mature tree when the 100 years war broke out, and it might have been an attractive speculation that the local bowmen of Cheshire, especially any from the neighbourhood, could have used bows manufactured from wood from this tree during the French wars. We know for example that William Jodrell was in France with a group of bowmen, who would almost certainly have been local. Unfortunately some experts believe that the English Yew, splendid tree though it was, and is, did not produce wood of sufficient quality for the manufacture of longbows, for which all yew wood was imported from Spain and Portugal. This view has been challenged, but there are other reasons for supposing that English Yews were not used for longbows. In his book “The Complete Guide to Trees of Britain and Northern Europe” the well-known tree expert Alan Mitchell, discussing yew trees in churchyards, wrote “Had the yews been grown for longbow wood it would be hard to explain why one or two were not used in nearly every churchyard. If the branches only were used (and they are generally far more suitable than the boles) there would be no primary branches found today, nor would it be likely that multiple boles and low forks would be so frequent”. Alas, we cannot reasonably speculate that bows from Goostrey were used at Agincourt.

Written in 1992 by Arthur Jones and Rod Wainwright . 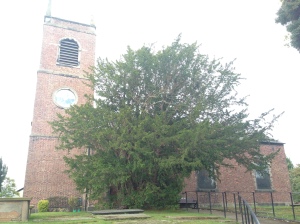 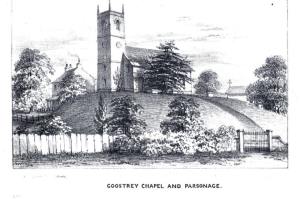 ..  extract from A short history of St. Luke’s, Goostrey & the Yew tree)