At Love Goostrey we’re firm believers in all the things that Buddy the Elf taught us: spaghetti and syrup is a fine recipe, alcohol in coffee makes Cossack dancing possible and, of course… 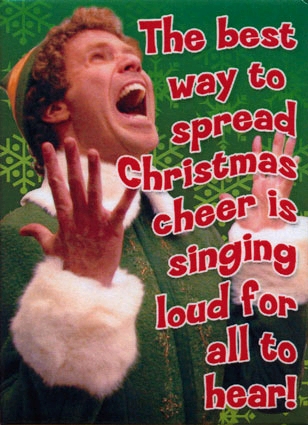 So, when we received word from Angela Gilmore concerning Christmas caroling to raise money for the amazing homeless charity, Lifeshare, we knew we had to help. Over to you Angela.

“From long years of experience, people who join us always say that it is the real start of Christmas for them, that it is the most worthwhile thing they do at that season – or just that they thoroughly enjoy the experience of bringing joyful music to their neighbours.”

“However, most of our ‘regulars’ are getting rather long in the tooth for standing under street lamps singing and numbers have been dropping for several years. It’s not that we need masses of people as we have several good voices in our midst, but if the numbers fall too low, there are too few to carry the tins round the doors, and the fewer the tins, the slower the progress, and the less money raised for those who need it.”

You can see the problem.

So – are you up for adding your voice, or your tin-jangling abilities to help this year? If so, all the details are below. If you could comment on this post or on the Facebook post to say if you’re in then Angela can get an idea of numbers.

Think of how proud Buddy would be.

All proceeds go to Lifeshare, a charity which provides shelter, food, fellowship, washing facilities, advice etc over the christmas and New Year period in central Manchester. They took over some years ago to continue the work done by Crisis.

Wear something warm and remember you don’t need a good voice – just a love of singing; or you could even help greatly by carrying the collecting tin. The spirit is still the same! Bring a friend!

3 thoughts on “Fancy singing loud to spread Christmas cheer and help the homeless?”