Blog by Vic Gardener. “Remember the Gooseberry Show bit in #VictorianKitchenGarden? Well, this year I went to #Goostrey to see for myself. Amazingly, the top prize was won by Doug Carter, son of Frank, who won in VKG in 1987.”

On Saturday 27th July, 2019, I fullfilled a long-standing promise to myself. No, not that one, something even better. I finally made it to the annual Gooseberry Show in Goostrey, Cheshire. After I’d seen the ‘July‘ episode of ‘Victorian Kitchen Garden’ back in 1987 I knew that, one day, I would have to go and see what Peter Thoday termed the “strange custom” for myself. So, almost thirty-two years later, I found myself sat in a prime spot in The Crown Inn at 1pm.

Peter was right, it is strange and, if I hadn’t seen it on TV first, it would probably have seemed stranger still. Despite some modern technology, the ‘feel’ was exactly as I remembered watching on TV. Expressions like those I’d heard in that episode, “Can we have the Association Witness, please?”. and “Frank Carter’s on.” were echoed throughout the afternoon, as some very large berries were played, one against the other, on the delicate balance. 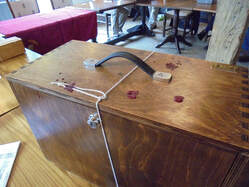 One of the gooseberry boxes, still sealed

The formalities of the competition seemed as unchanged as they are mysterious. Once permission is given to open the boxes of berries, picked and sealed the night before, berries are offered for balancing, class by class. They are transported from competitor to the High-Priestess of the scales by another official, in a way that looks confusing to the uninitiated but no brown envelopes change hands, and no-one complains about sleight of hand. They are balanced and re-balanced until not only the largest berry is found in each class, but 2nd, 3rd, etc., too. They are then individually weighed and recorded using the old troy measures of pennyweight (dwt) and grains (grns).

The Holy Grail of a Gooseberry Show is the ‘Premier Berry’; the heaviest of the heavy. In that episode from 1987, the winner of Premier Berry was the legendary Frank Carter. Not only was Frank a prolific grower and shower, he also bred new gooseberry varieties, and most of the modern winners have been grown on Frank’s varieties.

How fitting, then, that the 2019 Premier Berry class was won by Frank’s son, Doug Carter. Doug hasn’t been doing so well for a few years but came back this year with a vengeance. Not only did he win Premier Berry, with one of Frank’s varieties, ‘Bank View’, weighing 28dwt 18grns, he also came first AND second in the class for ‘Green’ berries, and first and second again in ‘Yellow’, and second and third in ‘White’. In all, I think I counted eight trophies in his haul including, because he’d been out of contention in recent years, the cup for this year’s most improved grower! It really was Doug’s year.

These days, as well as the silverware which has to go back at the end of the year, a ‘Frank Carter Memorial Plate’ for the winner of Premier Berry is also awarded. Each one is unique, with the year, winners name and the variety recorded on it. This way they get to keep a permanent memento of their win. Unbeknownst to Doug, there had also been moves to create a special ‘Lifetime Achievement’ version of the plate, to acknowledge his contribution to gooseberry growing in Goostrey over the years, meaning he gets not one but two plates this year.

The award presentations were made by author and local man, Alan Garner of the Blackden Trust, and the Frank Carter Memorial Plate was the idea of Alan and his wife Griselda, who was also showing gooseberries.

Despite how it seems, Doug didn’t get it all his own way. Last years Premier Berry winner, Emma Williams, won the ‘Red’, the ‘Twins’, and the Yellow ‘Show Plate’ (12 berries) classes. Another Premier Berry veteran, Terry Price, won the ‘White’ class, and 2017 winner Martin de Kretser won the Red ‘Show Plate’ class, for instance.

Full results can be found here.

My thanks to the Goostrey Gooseberry Society (in particular, Secretary Martin de Kretser for imparting his knowledge and for convincing me to go this year), Doug Carter, the ‘Crown Inn‘, and the good people (and their dogs) of Goostrey. See you next year!