Sad news of the death of Mrs Elsie Maddock, Goostrey Rose Queen of 1934.

Elsie Maddock (nee Capper) became a much loved stalwart of the town carnival movement, both as an adjudicator (notably for the Lancashire Carnival Organization for 25 years) and as trainer of Goostrey Morris Dancers. Fifty years after she was Goostrey’s Rose Queen she was President of the Goostrey Rose Festival in 1984. 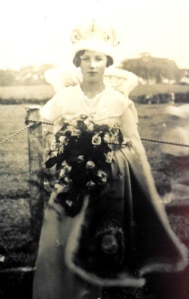 Photos from Dr Lucy Wright, who made the wonderful commemorative shield in 2017 for the front of Elsie’s house, “she was much loved throughout the carnival world – and will be sadly missed”. There are already some lovely messages on LG’s Facebook post led by grandson Andrew Maddock “Thank you for the beautiful pictures of grandma. She had so much love to give to everyone. We will all miss her so very much.” 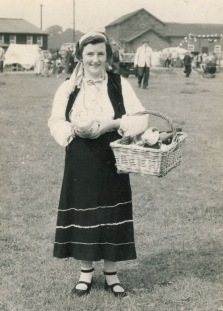 “We hope you had an amazing Rose Day 2018. We would love to get your thoughts on the day and improvements and changes you’d like to see.

Please could you fill in the form below for yourself – but also complete the form again on behalf of any children in your household – that will allow us to get a range of views about the event.

We will draw one lucky winner who will receive free entry for a family of 4 to Rose Day 2019!”

The report from the Knutsford Guardian with LoveGoostrey’s photos:

Large crowds lined Main Road to watch the procession, which was made up of floats and walking groups led by a steam traction engine driven by Terry and Des Bostock.  They pulled a special trailer carrying the gold queen Christine Derrick, nee Collinge, who was Rose Queen in 1968 and the silver queen Clare Woods, nee Leake, who was queen in 1993.  They were accompanied by James Smallwood, who was Crown Bearer 50 years ago.

Samantha, who was crowned in front of last year’s queen Abigail Burgess, was accompanied by her attendants Polly Clayton, Francesca Fairhurst, Grace Hey and Ellisse Nasry. 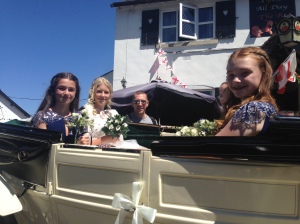 The Rose Bud Queen was Kate Pearson and her lady in waiting was Isla Machin.  There were five attendants, Gabriella Ashbrook, Scarlet-Rose Challinor, Tilly Foster; Brianna Hamilton and Isla Kingsbury.

This year’s Rose Day President Bill Ollier has been involved in many community activities, including helping to organise Rose Day and the village’s annual arts festival Goosfest. The MC was Howard Palmer.

The winners of the plank walking competition, which was introduced for the first time this year, proving extremely popular with the bumper crowd, was an all-women team called Always Right.

The day was rounded off by a Ceilidh, which because of the exceptionally warm weather was held on the school field instead of inside the marquee.

On Sunday, a special service was held at St Luke’s Church, where the children were encouraged to attend wearing their Rose Day costumes.

Chairman of the Rose Day committee Christina Burgess said: “This was possibly the best ever weather for our annual event, and I was delighted to see so many villagers turn out to support us.  Rose Day is a traditional village event and yet again it was a great success, but it would not have been possible without all the hard work put in by the committee and countless other volunteers.”

The village decked out in bunting 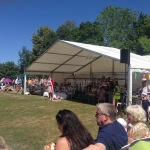 The Jon Lee Cup for the best decorated children’s float went to Cops and Robbers.  Four seasons won the best decorated banner and the best community float went to Budge’s Rockers which featured 95-year-old Margaret Kettle. Best visiting Queen’s car went to Lower Smallwood.  The Festival Bowl, awarded for the best single Rose of any variety, exhibited in a container of the competitor’s own choice, was won by Ayleen Jarvis.

The Luke Brothers Trophy, for the three Roses of one or more varieties, went to Jill Whiling.  The Chairman’s Vase, awarded for an arrangement of garden flowers, was won Mark Bowers.  The Hodgson Cup, for a table arrangement including at least one rose, was won by Mrs. P Booth.  The Edward Simpson Cup, for the best flower arrangement of garden flowers in a jam jar by a child under eight, went to Noah Hemming Schofield Memorial Cup for the best garden flowers in a jam jar by a child aged 8-11 went to Cate Clayton.  The children’s competition of a vegetable dinosaur was won by Millie Jeavons in the Under 8s category and the 8-11 class was by shared by Seb Fairhurst and Cedric Landau.  Knutsford Guardian

***click here to   see more photos from the day

Wednesday 6pm onwards – Pop down to the Pavilion if you could help with Rose Day preparations!

(and don’t forget the roads will be closed on Saturday 1.00 til 2.30ish for the procession)

Tombola:
We are always grateful for donations for our tombola stall. please bring 2016 Donations to the field on the morning of the 25th June. .

Toys and Books:
The Rose Day committee will again be running a second hand book and toy stall, any donations will be most welcome, again please bring to the field on the morning of the 25th June..

Cake Stall:
One of the most successful stalls at Rose Day is the cake stall but we do rely on cakes being donated. Please bring any donations to the field on Rose Day.

Please bring donations for the books/toys, and plant stall to the field on the morning of Rose Day Alternatively, labelled plants can be deliver to Chris Burgess at 8 Eaton Lane. If the plants need collecting, ring Chris on 535443″

Can you spare some time to help the Rose Day committee set up for the big day? Times and locations for helpers are listed below:

If you can help send a message through “Goostrey Rose Festival” Facebook page..